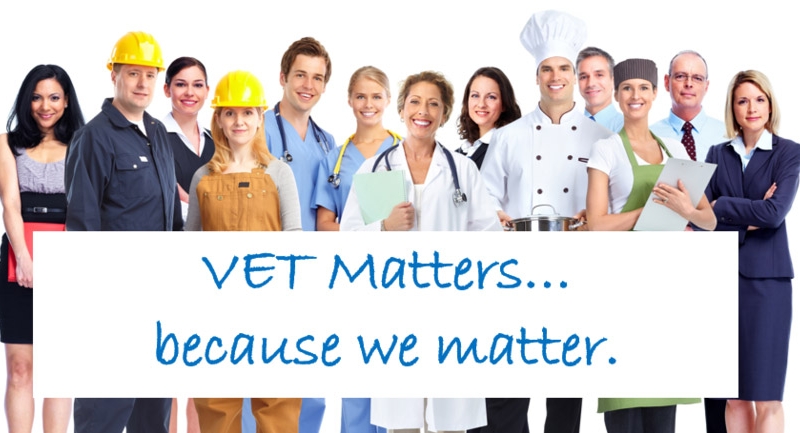 At RTO Doctor, we understand that sometimes its easy to get overwhelmed by changes in industry, updates to regulation, and the details of compliance. We wanted a place to remind practitioners of the importance of VET. Below is a collection of tales, stories and uplifting moments by fellow VET professionals. Thanks to everyone who contributed on our LinkedIn strand, if you have a positive story of VET, please email us and we will continue to grow this list. Come back and have a read any time you need a lift!

"I have many examples that have touched my heart and helped me become the VET professional I am today, too many to mention. Perhaps the one that sticks with me the most was during my time as a prison educator at Pentridge Prison in Melbourne (before it was decommissioned).

There was a man who had become institutionalised by the system; he had a family, ex wife, children and grandchildren but was unable to function outside the prison system. He'd been in and out since childhood, his parents had been in and out all of their lives as well. The man in question was not able to read or write and this was a contributing factor to the life he was living and his high rate of recidivism. He came into our classroom at what was known as 'E Division' and he said that he had a granddaughter that was to visit him and he wanted to learn to read so he could read her a children's story. This man who would have been in his late 50′s had never had an opportunity to learn to read and our system, through (at the time), the Certificate of General Education for Adults gave him the opportunity to try and change the vicious cycle that prison had become for his family. He wanted to break the cycle in his grandchildren by learning to read.

Not only did he learn to read, he also learned basic mathematics and decided to establish a landscaping business. He set up a business plan and genuinely tried to change his and his family's life. While he was never able to get his landscaping business off the ground, he was able to read stories to his granddaughter and this was one of the most precious gifts that anyone could ask for from our sector."

My first RTO job I was a trainer, admin, salesperson, all rounder in a tiny little RTO with about 40 students. We specialised in job seeker funding and offered childcare qualifications. About 6 months in I had a group of students, most of whom were single mums, never completed school and were looking to make a difference in their and their children's lives. I was recently separated myself so I immediately formed a close connection with the group. Throughout the course each of the women had their moments where they came to me in tears, issues that had come up with family, money, the general pressures of being a single mother with young children and doubts about whether they could do anything let alone complete a full course. I worked closely with each of them providing one on one assistance and tutoring. I discovered 6 of the women came from physically and emotionally abusive relationships.

Over the next year, each of the women in the group achieved their Certificate III and 14 received job offers through their work experience. Two of the women broke down in tears the day I gave them their qualifications, one woman told me she never thought she would feel capable of doing anything after her experience. She said it was the first time she felt worthwhile in years, I think I shed as many tears as my students did that year. I still get teary at the memory of it, I think those students taught me more than I did them that year and I am grateful to every single one of them."

Manager of Centre for Learning Advice and Strategy at CIT Solutions

After about 200 years in school and college education what caused me to switch to VET was the simple word YET. The concept of not YET competent as opposed to FAIL was hugely potent and so redolent of possibility, opportunity and encouragement that I thought I had to investigate more. It is still the differentiating factor between the sectors (though perhaps only just) and one I cling to it like a one legged gannet on an icy cliff.

I suspect that the description of human endeavour would be greatly improved by substituting the words not YET competent or not YET successful for the words FAIL or FAILING. Those words are much more indicative of giving it another go, far more about the chance to improve, far more about faith rather than judgment... and therefore far more about the encouragement and nurturing of learning – particularly for those who have been tarred and feathered by the morass of implications contained in the word FAIL before.

Fridges fail, batteries fail, torches fail. Peace talks, new policies, even regulatory bodies and above all – learners – surely are only ever not YET competent.

And that concept has caused so many teachers and learners I have known in VET to try again and succeed....and that's why I'm still here..."

"Mine was the day that I handed a Cert III Certificate in Customer Contact to a 45 year old man in front of his wife and children. He never finished school and it was his first qualification.

He was as 'proud as punch' and sobbed as he accepted the certificate. He cried, I cried, I think the whole audience cried. It was incredibly moving.

I think we sometimes forget that even a Cert III can have incredible meaning for our students and that the learning that comes out of even these lower level qualifications can have incredible impact on their work and future careers. He went on to a quality assurance role and later to a Team Leader role. And eventually commenced a Cert IV.

Getting teary just remembering it!

Thanks Lauren – I think we all needed a positive post about our own sector!!"

"As with many of you, over the years you collect too many good news stories to know where to begin. So I will say only this; one of the best feelings in the world is seeing the light of understanding go on in the eyes of your students ...... and having them come up to you in the street or shopping mall – years later – telling you what they have, since, made of their lives"

"Mine is that I have been able to give a Certificate II in business to women who have been historically abused in care, some of them indigenous. One of the indigenous women, formerly classed as ineducable, who has cerebral palsy, proved to have a mind like a diamond and an appetite for learning.

She was able to move into open employment after years of drudgery polishing mower blades in a sheltered workshop. I also gave her a scholarship into a Cert III in Health Services Assistance so she could volunteer in the Aged Care centre where her father, a community elder, lives. After a period working in a lunch bar, she has been recruited by Macdonalds who are putting her through the Cert III in Retail, constantly award her employee of the month and are grooming her for management training. I am very, very, proud of her and she goes on Murri radio to tell indigenous youth to get off their backsides and get into learning and earning. Not bad for a woman who could not read and write a decade ago and was kept on barbiturates to keep her docile.

This week's joy was the over 50s security guard who phoned up to say he had secured not one, but two offers of employment as a trainer. It was a long way back from where he was with his confidence eroded from constant rejections, but he tackled the course head on, overcame his barriers and is an asset to our industry.

That is what keeps me working over the age of 70, because that it what is all about."

"There are so many over the years but one recent one that comes to mind...a young lady completed a range of Certificates at school and was told that there was no hope in agriculture so she should do sometime worthwhile...she is now a manager on her parents farm, has a Diploma in Agriculture, has won regional and State training awards and bursaries, has won industry scholarships, attended industry conferences and events, spoken to school children about careers in agriculture and is taking up an overseas job offer very shortly to broaden her horizon and experiences...all this and not yet 23 years old as well as overcoming some learning difficulties.

School and universities pathways may not have been her cup of tea but VET did and has provided her with a viable alternate pathway to the future...as it does for so many people."